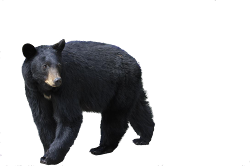 East Cowpen Trail gains over 200 feet in elevation to its junction with Rough Ridge Trail at mile 0.4. The junction is on the right indicated by a trail sign.

From there it runs 4.6 miles tracing the top of Rough Ridge occasionally dropping to either the east or west side of the ridge for a spell gradually losing elevation. This 4.6-mile section of the trail has decent winter views and is fairly wide and easy hiking along the ridgeline with an occasional descent to a gap and a short ascent back up.

At mile 4.6 the trail descends to a small spring on the right and a sign stating No Horses Beyond this Point. From the spring there is a sharp ascent of .1 mile. The next 1.7 miles the trail begins a stair-step approach to Jacks River losing over 1000 feet. The trail alternates between an easy level stretch on the ridge interrupted by descents to a lower part of the ridge.

This part of the trail has its share of deadfalls and summer briars. It is also a trail that many times you can't see 50 feet down the trail due to its many twists and turns on the ridgecrest as it descends to Jacks River.

From mile 6.3 mile the trail enters the rhododendron belt that always springs up where there is water. And the big majestic Eastern hemlock is still here. By far one of the biggest hardwoods in the Cohutta Wilderness. There are pockets of old growth throughout the wilderness. On top of Panther Creek Falls, there is a pocket of old growth. These majestic trees change the character of the woods with their towering heights and width for this part of the world.

Rough Ridge Trail is lightly used compared to other trails in the wilderness. It constitutes 7.0 miles of a 15.9-mile loop starting from Three Forks Mountain and hiking the East Cowpen to Hickory Ridge to Jacks River to Rough Ridge Trail in either order. We hiked it the opposite way and East Cowpen can be a bear if you are already tired. This is predominately a ridgetop loop trail even though you can jump in the Jacks if you are hot between the ridges.

"The wilderness is a place of rest - - not in the sense of being motionless, for the lure, after all, is to move, round the next bend. The rest comes in the isolation from distractions, in the slowing of the daily centrifugal forces that keep us off balance."
-David Douglas, Scottish botanist

Eton, GA Access: From Eton, GA (one-red-light town) take a right from Hwy 411 onto CCC road at the red light. Go 6.0 miles until the road turns into gravel and Forest Service Road 18. Once on gravel, it is approximately 10 miles from Potatopatch Mountain. Drive 1.1 miles and the trailhead for Emery Creek is on the left at Holly Creek. Continue 2.9 miles until the three-way intersection with FS68.Take FS68 and begin going uphill.

Stay on FS68 for approximately 6.0 miles until the T - intersection of FS68&#47FS64 at Potatopatch Mountain and take a right. Drive 4.3 miles to the trailhead on your left.

Distance being equal this is the easier route due to more of the road being paved.

If coming from Ellijay, GA it is better to take Hwy 52 west and cross Fort Mountain and take County Road 64(Conasauga Road) north which turns into FS18. Drive past the mountain bike place Mulberry Gap and at the next intersection take a right onto FS68.

Continue driving to the next intersection with FS90 and stay left on FS68 going up the mountain. At the top of the mountain is the 3-way intersection of Potatopatch Mountain.Take a right onto FS64 and it is 4.3 miles to the trailhead.

Please include name of trail in comments since all comments are duplicated to the home page comments after 4 days.